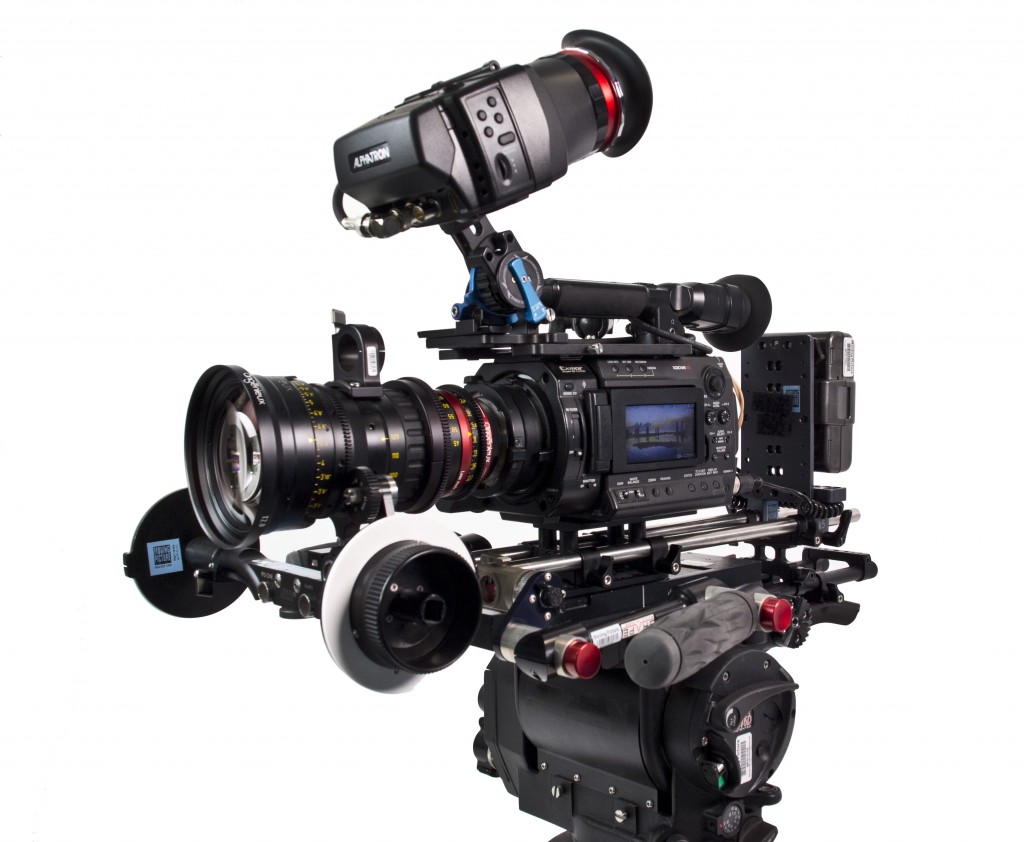 With all the industry buzz about the new Sony F5, the F3 seems like yesterday’s news.  In many ways, that’s correct.  However, for those of you that own one of these still relevant camera systems, you know it’s a great tool for corporate video, documentary, and low-budget commercial work.  It still produces an excellent image while in S-Log mode, and it still has excellent latitude and meager lighting requirements.  There just isn’t enough justification to spend $20,000 on a properly accessorized Sony F5 if you really don’t need the 2K resolution that camera can provide.

It seems that nowadays a camera is only as good as the toys you can bolt to it, and we’ve redesigned our Sony F3 camera support system to be flexible and functional.  Here are some of the toys we’ve purchased to accomplish this. 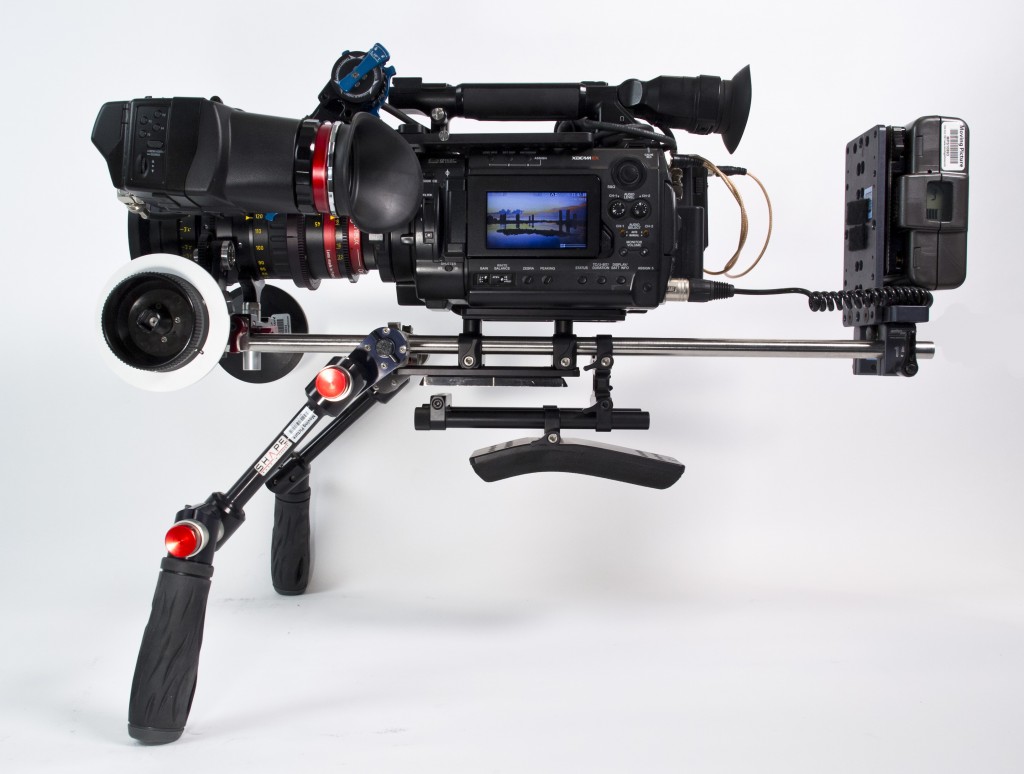 Berkey System offers some great accessories for the Sony F3.  Our favorite is the F3 Top Utility Plate and Plate Extension.  This little gem mounts to the camera using the two ¼-20 mount points on the top of the camera and still gives you access to the playback controls on the top.  The utility plate features sixteen ¼-20, six 3/8-16, and a dozen 10-32 tapped mounting points, as well as a focal plane stud on which to hook a measuring tape.  Aside from giving you broad flexibility in mounting additional accessories, it helps to reduce the stress on the plastic camera body by spreading the load of the mounted accessories throughout the entire plate as well as both mount points to camera.  The optional front extension provides even more flexibility as discussed later in this article. 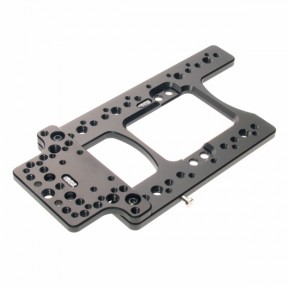 The Berkey 15mm F3 Baseplate is a robust unit designed with flexibility in mind.  It provides 15mm lightweight rod mounts that are vertically adjustable for fine-tuning as well as forward and aft adjustment for balance.  On the bottom, there are mount points for the ARRI BP-6 or the ARRI BP-8 19mm Bridgeplate, should you need to run 19mm Studio camera support. 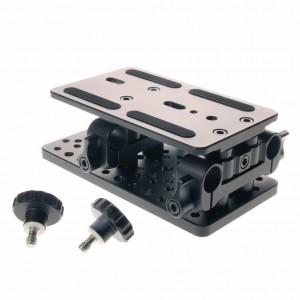 Berkey’s shoulder pad system is designed with convenience in mind.  It can be left attached to the baseplate in “disengaged” mode when on a tripod.  When you’re ready to go handheld, simply pop the camera off the sticks, loosen a couple thumbscrews, and swing the shoulder pad 180 degrees to the “engaged” position.  The tripod plate may be left on the camera for this.  All of these Berkey System accessories can be purchased together for about $1000.

While Berkey System does offer a front handle kit that works with the rest of their camera support system, we’ve opted for a more flexible product from Shape.  The Vintage Double Handle Rosette kit features two separate handles that mount via standard ARRI rosettes.  The Shape handles feature quick adjustment thumb buttons to change the orientation of the handles or the extensions while the rig is on your shoulder, no “third hand” is required to loosen or tighten the tie-downs. To get ARRI rosettes on our F3 rig, we chose the Movcam 15/19mm Hand Grip Adapter.  While Shape does offer a similar product, the Movcam unit was selected for it’s sturdy design.  If you don’t need 19mm support, Element Technica makes a smaller 15mm only Rosette Bridge.  The handles and both rosette bridge adapters shown can be purchased for about $1500. 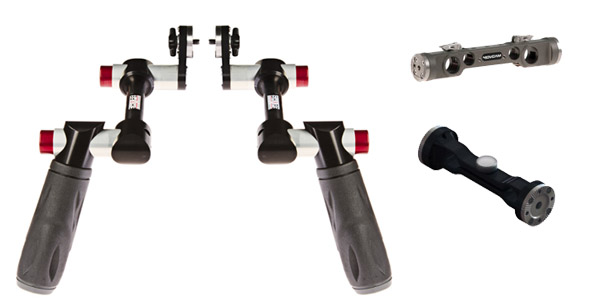 The Sony F3’s EVF has been criticized since its initial release as it’s mounted in the wrong place to be considered useful, and it doesn’t look very good, it does a very good job at getting in the way of the battery and memory card swaps and menu navigation controls. While the EVF and top handle can’t be removed without voiding your Sony warranty, a new EVF system can be implemented to that makes more sense for today’s typical digital cinema usage.

Alphatron teamed up with TV Logic to design a top notch EVF system for today’s mid-range camera market.  It features both HD-SDI and HDMI loop-through ports, HDMI to HD-SDI conversion, Waveform and Vectorscope, and a 3.54” Retina display.  The Retina display is the same one that you will find in an Apple iPhone 4/4S. The Alphatron EVF can be purchased for about $1400.

To support our one pound EVF, we could just mount it with an average Noga arm, but we chose the Solid Camera EVF support system for a more rigid mount to the camera body.  Solid Camera will customize your mount order to provide you with the correct EVF and camera mounting accessories for your EVF support bracket.  In this case they provided an Alphatron EVF bracket and their 90 degree dovetail mount with is meant to be attached to the Berkey Top Plate Front Extension piece.  The EVF Support gives you horizontal, vertical, and angular control over how your EVF is positioned on the camera and can be purchased for between $700-$800 depending on your selected mounting hardware.

When it comes to selecting an onboard video recorder for your camera, your options are broad and plentiful.   You could opt for the AJA KiPro Mini, which has excellent rigging accessories, but a rather dismal menu system.  Another choice could be the Sound Devices PIX-240, a well featured and solidly built device, however its bulky size makes rigging a challenge, and the PIX’s power-hungry electronics will also chew through Sony L batteries faster than you can charge them.

With the Atomos Samurai recorder we found a compromise.  Designed with the same basic ProRes/DNxHD recording functionality as the KiPro and PIX-240, but with a smaller form factor and a slick touchscreen menu system.  Additionally, it comes with a pair of low-profile Lithium-Ion batteries that will power the unit for 8-hours of continuous power.  And unlike most camera electronics these days, the Samurai comes with a seemingly vast array of support accessories.  Aside from the included batteries and charger, the Samurai package also includes two SSD Caddies, an SSD docking station, AC power supply (with four international adapters), and a Pelican-style custom case for its $995 purchase price.  Sounds like good value to us. 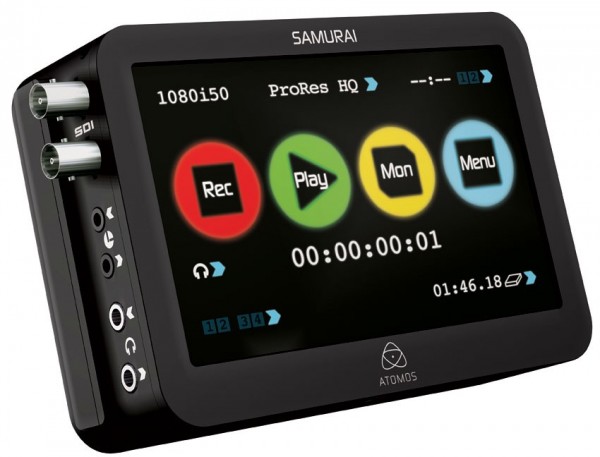 The Sony batteries that power the camera aren’t really that bad.  They last quite a while, and recharge in a reasonable amount of time.  But when accessorizing this camera with an onboard recorder and an EVF, you’ll definitely want to power all your accessories from a single industry standard battery.  The Anton Bauer QRC Gold plate comes with two D-Tap ports to feed your accessories and a 4-Pin cable to feed the camera.  This will allow for battery swaps of either the onboard Sony battery or the Anton battery without powering down the camera.  The Anton Bauer Matrix Cheese Plate and 15mm rod clamps will keep your battery securely mounted to your rig without getting in the way. 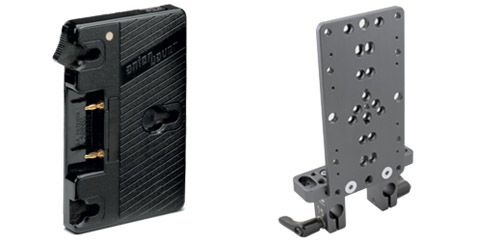