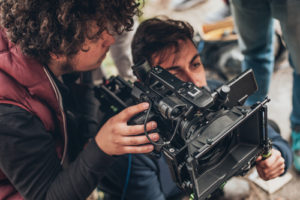 From pre-production to post, any given production can have hundreds of jobs. Some productions, like the feature Hugo, have over a thousand! Even seasoned producers, skilled at managing productions from start to finish, can find crewing a mind-boggling endeavor.

If you’re new to the role of producer, it’s crucial to understand the various positions and the gear needed to properly perform their jobs. Moving Picture Rental offers full production services in Florida, including helping you crew up. To help you make sense of just what a best boy, grip, and AD do, here’s a list of key crew members and why you need them to ensure a smooth-running set.

From Cecile B. DeMille’s epic productions to Walt Disney’s animated films and George Lucas’ special FX laden franchises, the producer’s role is to bring their unique talents, insights, and innovations to films that captivate audiences, generate profits, and, hopefully, win awards. The production support team invests in achieving the director’s vision. But historically they have no say in the creative expression or narrative of the film or video.

What they do: Unit production managers (UPM), line producers, production coordinators, and PAs, help with the organization, prep, and wrap of a production.

Why they’re needed: They handle the physical aspect of running a set and are critical to executing certain logistics like making sure gear and equipment arrive on time.

What they do: Run the day-to-day management of the shooting schedule.

Why they’re needed: 1st, 2nd, and 3rd AD’s make sure the rest of the crew stay on track. 1st AD’s function as the director’s right-hand person. They’re responsible for the extras, breaking down the script into a storyboard, and work with the director to determine shoot order. On larger productions, 2nd and 3rd AD’s ensure that all the first AD’s orders and directions are carried out. They prepare call sheets and oversee cast movement. For example, they ensure actors are in makeup, wardrobe, or on set at the right time.

Art directors work directly below production designers and in collaboration with set designers and set decorators; they also act as a liaison with other departments like special FX and construction. The craft of art production dates to the beginnings of filmmaking when illustrators were first employed to develop conceptual storyboards. In the 1950s, set designers, model makers, and scenic, title, and graphic artists became part of the art department.

What they do: Art directors, prop makers, prop masters, graphic and matte artists, painters, set builders, set decorators, and storyboard artists are responsible for giving a production the “look” the director is going for.

Why they’re needed: The art department, led by the art director, do everything from constructing custom props to creating storyboards representing each camera set-up. They’re charged with bringing a brand’s look and feel to a commercial or in realizing a feature film director’s creative vision. They also oversee the striking, or dismantling, of the sets and locations.

Masters of light, lords of the lens, the kings and queens of camera. They’ve been dubbed a lot of things, but DP’s are second only to the director when it comes to the visual style of a production. Great cinematographers develop a symbiotic connection with their director and are often hired over and again. The camera crew assists the DP in bringing the director’s vision to life.

What they do: DP’s/Cinematographers, 1st and 2nd AC’s, stills photographer, and DIT/media managers prep and operate the camera, set up monitors, track footage, take publicity stills, and manage digital media.

Why they’re needed: The director of photography works closely with the director in designing appropriate lighting plans, framing scenes, positioning actors, and moving the camera. Most importantly, they make it all come together to achieve the director’s detailed vision. They often serve as their own camera operators, but still require the help of 1st and 2nd assistants to make sure lenses are clean and all the equipment is ready to go at a moment’s notice. They also pull focus, a highly technical skill that’s needed to achieve a true cinematic look.

What they do: Gaffers, key grips, best boys, grips, generator operators, and electricians also take their cue from the DP. They’re in charge of all electrical needs on set.

Why they’re needed: Although they have some of the most confusing names, every electrical department member is key to achieving the best-looking shot. Gaffers head up this department and are responsible for designing and executing the lighting plan. Best boys are the gaffer’s head assistant and typically watch over the electric truck and rentals.

Grips support all the non-electrical components on set, but they work closely with the electrical crew. They set up any gear for the camera, such as cranes or tripods. The key grip works with the DP to achieve the correct lighting and blocking for every shot. They also diffuse and cut light and handle physical camera movement via dollies, cranes, and vehicle mounts.

Second-in-command to the gaffer or key grip, there are “best boys” in both the electrical and grip departments. The story  goes that in pre-union days, studio department heads borrowed each other’s “best boy” when they needed extra help. Duties include placing lighting equipment, supervising the crew, and taking down and storing equipment in the grip truck once shooting is complete.

Whether a film script is set in the present, past, or future, or in an imaginary time and place, makeup artists and costume designers work closely with the director, cinematographer, and production designer to bring the story to life. Their artistic contribution conveys unspoken information about each character’s personal, social, and economic traits.

Why they’re needed: Makeup and wardrobe help actors establish their characters. They also give directors their desired look and style. Depending on a shoot’s size and budget, a stylist and assistant may be the only people you have overseeing wardrobe. And on smaller shoots and commercials, a hairstylist and makeup artist are one and the same person. Responsibilities include assisting with the design of costumes and accessories, organizing fittings, dressing performers, and overseeing continuity on sets.

As you get your full production services in Florida organized, there are other important crew members to consider. These include: location managers and scouts, script supervisors, boom operators, sound mixers, stunt coordinators, and transportation drivers.

Each production requires a different combination of any or all these positions. But one thing’s for sure: the more experts you have on your crew, the higher your production value will be.

At Moving Picture Rental, with our full production services in Florida, we can quickly and easily put together the crew you need. And because we’re a full-service production service, we can supply all the latest gear your crew needs.