With budget cuts over the past five years, Florida film tax incentives have taken a hit.  After a reduction from $25 million available in 2007 down to $5 million in 2008 then up again to $10.8 million this year, visiting productions to the Sunshine State have varied in volume and become increasingly scarce.  As other states have pushed to get in on the $60 billion U.S. film industry, Florida now more than ever needs to reclaim its title as a film production heavyweight.

Florida’s Office of Film & Entertainment (Tallahassee, FL) promises films with a budget of $625,000 or more an expenditure-based rebate of 15–22%.  Independent Florida films must have a budget of $100,000 or more to receive a similar rebate of up to 17%.

These incentives fall short when compared to plans put into action by several other states.  Michigan pulled in Clint Eastwood’s “Gran Torino” and a whopping 27 additional features this year, versus luring just three Michigan-based films in 2007.  This is the result of a dramatic change in Michigan incentives that now provide tax refunds to the tune of 40% across the board on in-state expenditures and require a minimum budget of $50,000 to qualify.  While the Wolverine State has set a new bar for incentive plans, other states continue to draw Hollywood’s attention.  Louisiana, Massachusetts, and New Mexico have each launched massive incentive campaigns resulting in relative production increases within each state.  Equally, California has passed incentive plans that aim to maintain its status as an industry hub while reclaiming productions that have sought out greener pastures. 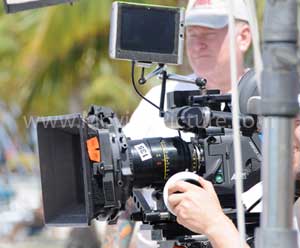 In most cases, tax based film incentives are directly related to the amount of production expenditures spent within each state.  If a given production doesn’t spend money in-state they can’t fully reap the benefits of corresponding tax breaks.  Accordingly, this develops a mutually beneficial relationship between the state and the production companies.

This direct interaction of giving productions tax breaks to stimulate in-state spending has trickle-down benefits to a vast range of businesses.  According to Michigan State University’s Center for Economic Analysis, Michigan communities benefited from more than $65 million in spending from film productions in 2008.

While much of Michigan’s effort is focused on building an infrastructure within the state, leading to an anticipated eventual reduction of their huge incentives, Florida has long maintained a strong infrastructure for film production.  According to a study by the University of West Florida’s Haas Center for Business Research, Florida’s film industry has an in-state economic impact of $29.3 billion.  Rental houses, postproduction facilities, professional studios, sound engineers, grips, gaffers, and camera operators continue to operate from Miami to Jacksonville and beyond.  It is this infrastructure that will carry Florida’s production into the future and with a positive change in incentives, will once again establish Florida as a leader in this nation’s film production.