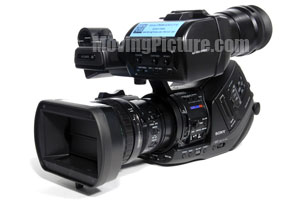 Sony has expanded on their XDCAM EX line with the PMW-EX3, a full-res HD (1920 x 1080p) camera that features an interchangeable lens, Genlock in, Timecode in/out, three 1/2” CMOS sensors and much more.Like it’s sister camera, the PMW-EX1, it records to SxS PRO flash memory cards. 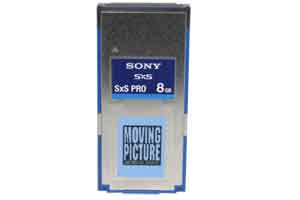 The EX3 is a great addition to the EX family of cameras, and the ability to change lenses, along with its other key features, makes it a better camera than most sub-$10,000 units on the market.This includes even Sony’s own XDCAM HD-line of cameras, many of which only feature 1440 x 1080 resolution and 1/2” sensors.But there are some drawbacks to the camera, most notably the ergonomics, which I’ll touch upon after the features.At the end of this review is a more full list of features.

With full HD CMOS sensors (1920 x 1080), the image quality is beautiful.Like the EX1, there are many ways to control the image via the Picture Profile menu, which I’ll discuss in more detail shortly.Because there is less compression than, say, HDV, the image is much cleaner without as much noise commonly found in HDV footage.

There are many options found in Picture Profiles, to control the overall image quality, including color, gamma, white balance, and more.

The EX3 comes with a stock Fujinon 14x zoom lens, which is 1/2-inch type lens for 1/2” sensors.Because it’s built on an interchangeable lens system, the camera’s stock lens can be swapped out for a different and compatible 1/2” lens.Ensure that the new lens can support HD images, or there will be problems.A lens built for standard definition (SD) cameras will be obvious when mounted on the EX3 in HD mode.

A 2/3” lens adaptor can be used to mount lenses found on cameras featuring 2/3” sensors.These lenses are very popular and used not only on high-end HD productions, but any project that can benefit from lenses that allow more depth of field options.

There are two XLR ports to plug in a solid boom mic or wireless mic to record pristine sound in two-channel, 16-bit, linear PCM uncompressed audio at 48 kHz.There is also a built-in stereo mic, but we recommend using a boom, handheld or wireless microphone.Moving Picture has everything you’ll need to get great audio. 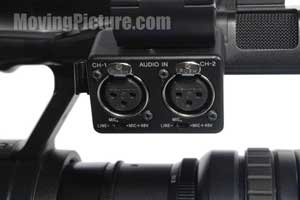 There’s a lot to love with the EX3: the key features above make this a better camera in many ways than most other sub-$10,000 cameras on the market right now, as I stated above.High resolution, image options, multiple frame rates, etc., make this a dream camera for filmmakers and videographers.

Now, what about the dislikes?The ergonomics issue is the biggest one shooters have.The viewfinder that flips up to become the LCD is large and obtrusive, and makes the camera heavy on the left.Shooters are having to adjust their bodies when going handheld with the cameras.

If you’ve been shooting on past Sony HDV cameras, you may be irked to see that button and knob placements are in different spots than on previous models.They’re different than even the EX1, and that may have to do with the lens and viewfinder/LCD placement.Camera companies are usually consistent with button/knob placements as new cameras come out, but not so with the EX3.

With some many great features, what’s not to like about the EX3?The images are gorgeous, shooters and their clients have many in-camera options to get the shots they desire, and the ability to change lenses is terrific.The SxS system is easy to use, and further evidence that tape is all but dead.All these positives outweigh the negatives, including the ergonomics problems.

We currently have the Sony PMW-EX3 in stock and ready to rent.Below is a more full feature list that you can quickly scan through.

An interchangeable lens system with a 1/2” lens mount (which works with the 1/2” CMOS sensors), which gives you the power to use different lenses. It comes with an incredible Fujinon wide angle 14x lens, with a wide angle view of 5.8mm, according to Sony. There is a special adaptor to use 2/3” lenses, which are popular on high-end cameras with 2/3” sensors.

Footage is recorded to 8 or 16 GB SxS PRO memory cards with up to two cards total in the camera, and is ExpressCard/34-compatible. You can record up to 70 minutes in SP mode on a 16 GB card.

Even more control of the image than ever before in Picture Profiles, giving shooters the power to customize the look.

Genlock Input and Timecode Input/Output (BNC connections), perfect for mutli-camera shoots to keep the timecode synced, whether it’s a live or live-to-tape video shoot, or a project that needs to be cut later.These interface options aren’t available on the EX1. 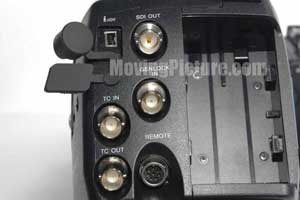 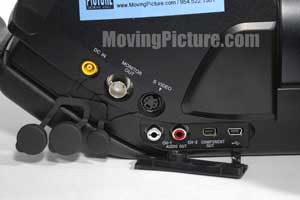