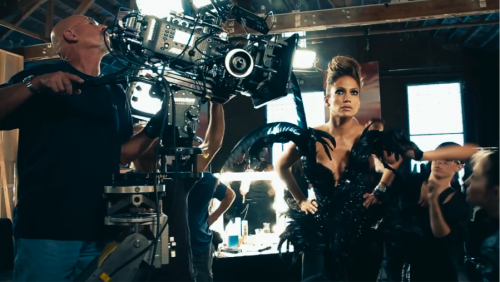 Daniel Pearle, ASC, with an ARRI Alexa, lines up a shot with Jennifer Lopez

Moving Picture was recently contracted to provide Video Assist, Sound Playback, and Sound Mixers services for the Terrero Digital production of Jennifer Lopez ft. Pitbull “Live It Up”.  Live It Up was shot on location at Fort Lauderdale Beach and Ice Palace Studios in Miami.  While shooting at the beach, there seemed to be no end to the string of online, print, and television media trying to get a good picture or maybe a quote from the ever-popular duo.

Live It Up is the third installment in Jennifer Lopez’s collaboration history with the Miami superstar, Pitbull.  Their prior works together, “On the Floor” in 2011 and “Dance Again” in 2012, were both well received by the music community and performed well commercially, we expect Live It Up to have similar results.

Live It Up was also nominated for a 2013 MTV VMA award for “Best Choreography”.  Congratulations to Jennifer and Casper Smart, Choreographer for Live It Up.  Best of luck on Aug 25th when the winners are announced!

We had a lot of fun working this set, there was an abundance of good energy throughout, and it showed in the performances.  Jennifer Lopez was a real trooper, and the end of an 18hr day-two was capped by a high-energy stage dance routine that made it all worthwhile.  At the end of it all we thought we had a good product that everyone would be proud of…and we certainly weren’t disappointed.