For decades, filmmaking and massive budgets have been wed to one another.  With the invention and evolution of digital video, the floodgates of quality, yet low cost production have opened.  Emerging from the waves of this revolution is the Steadicam Pilot, a newly accessible and functional version of the device that has been beyond the reach of low budget cinema for so long.

Mike McGowan SOC loves the Steadicam Pilot: “It performs like a much larger, more expensive sled. If I were to fall in a stunt situation, I wouldn’t be hurt because it’s so lightweight.”

Having released the Steadicam Merlin and Steadicam Flyer in recent history, Tiffen (formerly Cinema Products) has shown a distinct interest in reaching digitally inclined consumers.  While these models accommodated the needs of certain consumer and prosumer enthusiasts, there were several barriers preventing filmmakers from obtaining truly professional results.

As a handheld device, the Merlin was simply exhausting for its user, proving to be impractical for extended use.  With the arm/vest addition to the Flyer, we saw a closer resemblance in look and operation to Tiffen’s top end Steadicam Ultra and Steadicam Clipper models.  Unfortunately, with weight restrictions preventing the Merlin and Flyer from securing professional video cameras, the quality of cameras available for use with these models left much to be desired.

With the rapid advancement of lightweight, yet high quality digital video cameras, the ten-pound weight restriction of Tiffen’s Steadicam Pilot doesn’t retract from its overall quality.  There exists an entire range of professional cameras that fall within this weight class, including but not limited to the: Panasonic AG-DVX-100B, Sony DSR-PD170, Canon XL-1, and Canon EOS 5D Mark II. 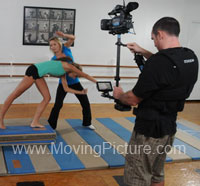 The Steadicam Pilot can be used for several hours without wearing the operator down.

No longer relegated to matrimony with cameras of insufferable quality, the Steadicam technology available in the Pilotprovides filmmakers with long awaited professional workflow.  Fitted with the essential vest, arm, and sled with monitor, the Steadicam Pilot is a streamlined version of the Flyer yet still closely resembles the aforementioned larger rigs.  In contrast to these larger models, the Pilot’s low total weight allows for an entire day of shooting without losing much stamina.

Additionally, while many other competing devices require the loosening and tightening of a series of screws to adjust fore-and-aft and side-to-side balancing, the Steadicam Pilot uses two simple knobs.  The Pilot also allows for quality shooting in both high and low modes (you can flip the camera’s orientation for high and low filming) with little time needed for the switch.

All this comes at a price tag of about $4,000, making professional quality Steadicam footage more accessible than ever.  A viable option for independent filmmakers and enthusiasts alike, the Pilot is absolutely worth its cost.