Home > Production Tips > Production Services > The Art of Being a Producer: Balancing Creativity and Business 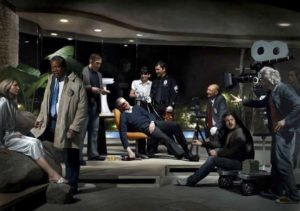 Generally speaking, no matter the size of your production, every person on a film set has a job that falls squarely in one of two different camps.

The first group is the creative team – the writers, directors, actors, etc. These are the dreamers — the people primarily responsible for coming up with the compelling ideas that will excite the audience. The second group is the technical team.  The people who use their skills, expertise, and tools to support the people in the first category.  These being the cinematographers, camera assistants, grips, gaffers, and PAs.

But there’s another position that happens to fall squarely in both of these worlds: the producer.

Producers are rare beings. They are masters at both the wild, creative and fantastical side of filmmaking AND the cold, calculated and financial side, too. These two objectives seem like they’re totally at odds, but their relationship is actually a lot more straightforward. Just keep a few key things in mind if you’re intent on being a producer who can move from creative mode to business mode and back again.

Training Your Creative Side to Think Like a Business Person

Because of how film productions come together, unrestricted creativity tends to get slowly whittled away as a script or ‘creative brief’ moves from one set of hands to another.

Take a narrative feature film as an example. Screenwriting can be pure, unrestricted creativity. As a writer imagines something, anything, they write it down. Suddenly the something that only existed previously in their head, now lives, at the very least, on paper.  Rewrites will expand or contract the script, as in Terence Winter’s The Wolf of Wall Street.

Then, as the ideas coalesce into a green-lighted script, it’s eventually passed along to a director who, along with the actors and their crew, will work on bringing that vision into reality. Sometimes the schemes aren’t realistic, other times they need fleshing out. That’s where the producer comes in. They work with the creative team and guide them towards a more viable, practical scheme. A task that’s, of course, often easier said than done.

The key to success in the creative process

Making sure that you don’t get locked out of ANY part of the creative process. Whether you’re shooting a documentary or a commercial, a corporate video or a feature narrative film, play a role in every part of the development process. Encourage your writers to fill the pages with as many crazy ideas as they can … but if you see something that just isn’t going to happen given your budget or other restraints, identify that problem as soon as you can. Do the same thing during discussions with your director and, if you’re on a bigger shoot, with the heads of your other technical departments, too.

The critical thing here is to make sure that there are few surprises when you’re actually filming your finished product. A small problem during the script stage exists in an easily fixable form. But as things move closer to the shoot date, you lose malleability as the script becomes written in stone.

But, if you’re realistic about what you can accomplish and maintain a big-picture perspective throughout development, you’ll be far less likely to wind up in uncomfortable situations, to begin with. That essentially is what the business side of filmmaking is all about.  And if you care to be a successful producer, it’s your job to be as good at this as possible.

Training Your Business Side to Embrace Your Creativity

But, none of this means that you need to be a SLAVE to the business side of filmmaking. Or that you should switch off your creative brain altogether. If a director comes to you with an idea for a shot that is either too complicated or too expensive, your job isn’t necessarily to say “no.” Instead, you can try, “no… but what if we did this instead?”

Think about the intention behind the shot in question:

You may not be able to accomplish all this in a literal way, given your constraints. But is there a realistic alternative that gets you the same or at least similar results?

There’s an old saying, “Necessity is the mother of invention.” Although he didn’t realize it, maybe Plato was talking about the daily life of a producer?!

Filmmaking is a collaborative medium

That’s why it’s so important to walk the fine line between creativity and business when working on any film shoot. After all, you’re working with the people on your crew, not against them. Your director has a vision they’re trying to bring to life. Your job as a producer is to help them do that effectively. And sometimes you’ve got to get creative in how you do it.

What if you changed the location? Would that make the shot more realistic to achieve? What if instead of a dolly shot, you use a Steadicam? Maybe it’s as simple as changing the blocking – can you convey the exact same scene in a slightly different way?

If something is wonderfully creative but logistically impossible, that’s unfortunate – but it happens. But remember that you surrounded yourself with all of these talented, passionate people on your crew for a reason. If the business side of your brain is telling you that something can’t be done, don’t let the conversation end there. Instead, pass things back to the creative side and see what innovative solutions you can invent as you and your crew continue to talk. This isn’t just how you accomplish results in a way that satisfies the business side. It’s how you take a good idea and turn it into an even better one. Thus filling your creative half as well.

As you travel between the creative and business sides of filmmaking, you’ll realize how important it is to have the right tools. Your vision for a film, tv show, commercial or other content may be perfect, but still downright impossible to bring it into reality without all the correct assets: camera rental, grip & lighting equipment, locations, professional crew, etc.

We’re filmmakers, first and foremost. As a result of our years of experience, we understand the push/pull of filmmaking. That’s why we’ve worked so hard over the years to become Miami’s one-stop-shop — a complete, turnkey source for all of your film equipment and production services needs. Rely on us so that, as a producer, everyone on your crew can depend on you.

If you’d like more information about balancing creativity with business in your position as a producer; or if you’d like to discuss your project with an experienced filmmaker, please call us. We’d love to speak with you.