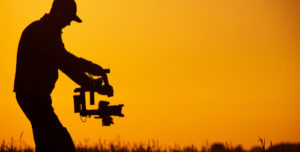 There are dozens, if not hundreds of cinematography techniques available to help you become a better storyteller. From pre-visualization to thinking—and shooting—like an editor, we wrote about some of them in a recent post.

In this post we’ll cover some techniques that might help you start to think even more outside the box of your comfort zone.

Have you ever heard a brief clip of unfamiliar music and immediately knew who composed it? Or seen a work of art (think Banksy) and known instantly who created it? That’s a signature artistic style and directors and cinematographers have it, too. It’s those recurring shots that make a scene unmistakably theirs.

Paul Thomas Anderson talks about how Robert Altman inspired his own character-driven films. And George Lucas gives credit to Akira Kurosawa’s storytelling approach. Drawing on these inspirations, each has gone on to create their own quintessential style. Here are just a few examples of cinematography techniques that have left their mark on fellow filmmakers and audiences alike.

To achieve it, set the camera at an angle, to compose the shot of either:

In other words, “tilt the camera to the side.”

These off-kilter shots have been used in many old and new classic films including Guy Ritchie’s “Snatch,” Christopher Nolan’s “Inception,” and Carol Reed’s 1949 “The Third Man.” But perhaps no recent filmmaker employed it more times in a film than Kenneth Branagh did with “Thor.” He uses dozens of them to great effect.

The trombone shot (aka dolly zoom)

If you’ve seen Hitchcock’s “Vertigo,” you’ve seen how this shot helps convey growing uneasiness, extreme paranoia, and horrific moments of realization. Spielberg uses a terrific trombone shot (enhanced by John Williams’ incredible score) in “Jaws” when the camera zooms in on Roy Scheider as he realizes the shark has attacked a swimmer. A technique meant to undermine normal visual perception, you can achieve the trombone shot by:

It can take a bit of practice to get the timing right, but the result and impact is well worth it.

Who can forget the long hallway scene in “The Shining” when the twins appear? No one filmmaker is more associated with one point perspective than Stanley Kubrick. Kubrick, who started his career as a still photographer, was known for drawing on works of fine art to compose his scenes and may have been inspired by Da Vinci’s “Last Supper.” Today, Wes Anderson carries on the tradition — he uses symmetrical shots to evoke a psychological reaction in the audience.

To pull off this shot, make sure all the horizontal lines in your frame, if extended infinitely, would disappear into a single (or vanishing) point, usually at the center of the frame.

There can be a lot of fun (and relief) in being intentionally sloppy with your shots. Whip pans let you do just that. Meant to convey abruptness and disorientation, whip pans are typically used to transition between scenes, but can also indicate the passage of time or some sort of frenzy. It’s done by simply swishing the camera from one shot to another, like this shot from “La La Land.” Sometimes a director will use this technique to hide cuts.

Done right, close-ups can have a massive emotional effect. Taken at relatively close range on a longer lens, these shots give an intimate look into something the audience might normally miss.

A close-up montage is an effective way to prime an audience for what lies ahead and generally includes 3 elements:

A name you’ll hear time and again with this technique is Edgar Wright. His “Shaun of the Dead,” “Scott Pilgrim vs. the World,” and “The World’s End” each contain impressive close-up montages. His secret to getting these great shots? He shoots them in reverse order.