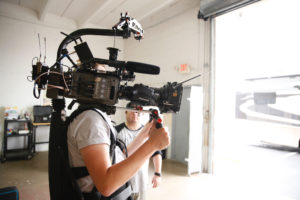 Before renting film equipment, you’ll need production insurance to protect it against loss, theft, or damage. Here are ten things you should know about that coverage.

If anything goes wrong during production, there will be a whole lot of people pointing fingers at you, the producer. While there’s not much you can do about stormy weather or clashing egos, quality production insurance is one of the few ways you can protect yourself financially against incidentals that ultimately plague every set. So if you think you need it, get it.

You’re going to be renting some costly equipment. More importantly, some very specialized equipment that few people know how to use correctly. While a good deal of filmmaking is learned on the job, you want to ensure the crew you hire to operate that equipment is qualified. Giving a friend an opportunity is great, but don’t make him your key grip if his only experience with rigging lights is plugging in a lamp.

Whichever broker you ultimately decide to work with, make sure they provide you with COI (certificates of insurance). Most, if not all, rental houses will want to see physical proof that the costly equipment with which you’re being entrusted is covered. If, for whatever reason, your broker of choice claims they are unable to do so, find another broker.

By and large, short-term policies fit the needs of most independent and amateur productions and producers. They usually provide coverage to productions with budgets under $1,000,000 for up to 60 days. That means your insurance likely has an expiration date. So work out all the plot points in development. Be realistic about your shooting schedule. And don’t unnecessarily indulge your director. Insurance companies are things, not people, and they won’t give you a pass.

One of the reasons filmmakers love shooting in Florida is because it’s picturesque. The beaches. The architecture and history. Of course, you want to take full advantage of those exteriors. The problem is, most of those shots will be in full view of a curious public that is as attracted to sets as moths are to flames. They’ll come to gawk and stay to trip over stingers or knock over equipment. Make sure your general liability covers these incidentals.

While filming on private property, you’re responsible for any damage to that property. And should the property be damaged in a way that prevents it from operating its business as usual once you’re wrapped, your production could be liable. For instance, you’re filming in a restaurant’s kitchen, and your lead actor breaks the oven. General liability won’t cover it, only third party insurance will. And telling your cast and crew to be extra careful is not going to cut it.

Again, general liability coverage can only be stretched so far. If a cast or crew member is injured while on-set, you’re responsible for their medical costs as well as the wages they’ll lose while out of commission. Without worker’s compensation, you’ll pay for that out of pocket.

Nope, this isn’t for a car you may rent for use during production. It’s for anyone affiliated with the production that gets in an accident or damages public or private property while driving their own cars. Because if that should happen, the production is liable.

Having insurance only means you’re insured. It won’t pay for a signal piece of equipment. Obviously, different rental houses have different rates, but they also have different schedules. In general, when renting film equipment they all start charging you once you pick up your package and not when you start shooting. Weekly rates are usually billed on a “3 day week,” meaning you only get charged for three days out of seven. But before choosing a rental house, familiarize yourself with their policies.

Regardless of the kind of coverage you get, the majority of insurance policies do not cover negligence, carelessness, or any other absent-minded behavior. If equipment gets damaged because someone was reckless, it won’t be covered.

Our staff at Moving Picture Rental knows that getting insurance when renting film equipment can be a daunting task even for producers with several credits under their belts. With more than three decades of experience in production rentals and services, we can answer your questions and allay your concerns so you can focus on bringing your vision to life.