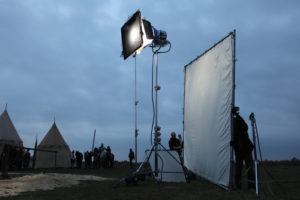 The first day of shooting is always an exciting time for cast and crew. But it wouldn’t be possible without the months of pre-production that brought everyone to the set.

You’re probably familiar with Edison’s quote about genius being 1% inspiration and 99% perspiration. Think of production as 1% realization and 99% preparation.

From 30-minute spots to feature films, pre-production is the process of discovering, researching sourcing, and bringing everything together to successfully execute the client and/or director’s vision.

This guide covers most but not every facet of filmmaking a producer must deal with before you can call “Action!” In other words, there’s always the possibility that just when you think the ducks are all lined up, a new one straggles in.

Every word spoken and every action taken is in the script. Most pre-production starts with a finished script that then undergoes changes as the director, cinematographer, department heads, and money people weigh in. Tweaks are common and whole scenes may be added, edited, or deleted.

Once you have a pretty solid script, it’s time to figure out which elements you need to actually make it. A script breakdown identifies locations, characters, costumes, sound effects, visual effects, props, extras, and everything else required for each scene. Storyboards and shot lists create a visual interpretation that the director and DP can use on set and the cast and crew can reference to make sure everyone’s on the same “vision track”. Here’s good shot breakdown software: https://www.mediaservices.com/showbiz-software/shotlogic/

A budget you can live with (and stick to)

Money. There never seems to be enough. Some projects come with a budget, other times you’ll have to create one. Start by listing everything you want: cast, locations, equipment, cranes, etc. It’ll probably be a pretty big number and it’s a lovely target. You most likely don’t have or won’t get it. So it’s back to finding more cost-effective options, lowering expectations, and re-crunching numbers more times than you can imagine.  This is some great software for budgeting: https://www.mediaservices.com/showbiz-software/showbiz-budgeting/

Most directors have crew they consistently bring to projects. Hire the rest as early in the process as possible.  The best people in the major film markets get booked far in advance.  The sooner key crew members are involved in preproduction, the better, because each person brings valuable input to the pre-production process. Many producers hire a production coordinator or production manager to handle this task, but a production services company like MPR, with its access to local talent can be a cost-effective choice.

A deserted beach. A 70s throwback shopping center. A hometown restaurant or honky-tonk bar. Maybe you need a couple sound stages. The sooner you find the director’s dream locations, the sooner you can nail them down and negotiate budget-friendly terms. Oftentimes storyboards will need to be tailored to meet a location or vice versa. A professional location scout or production services company that already has locales and/or sound stages in mind—or knows how to quickly find them—can be worth their weight in gold. Most locations require permits, agreements, and other paperwork, some of which can take a while to navigate. Start location scouting as soon as pre-production starts.

Your production will need professional gear like cameras, sound equipment, film lighting packages, cables, sandbags, and dozens of production supplies. Sometimes crew members, particularly camera operators or cinematographers, come with their own gear. But for the most part it’s the producer’s job to put a package together. Start comparing rental houses. Look at the gear they offer. Is it up-to-date? Is there spare gear waiting on the shelf if something goes wrong with equipment like film lighting, a camera, lens or grip equipment? In the middle of the night? A good rental house will work with you and help you stay on budget. Everyone at Moving Picture has hands-on film experience and wants to help your project succeed!

Permits, cast and crew agreements or contracts, and production and E&O insurance are the big three. Legal also covers obtaining intellectual property rights and clearances for things like music and video clips that’ll be used in production or post. If the shoot is union, you also need to ensure you’re in compliance with local rules regarding pay, hours in a shooting day, breaks, and the like.

The best script is worthless without a great cast. Casting calls need to be put out early and auditions scheduled. The director is typically there when casting larger roles, but often it’s the producer who works with a casting person to round out the cast. During callbacks and after video review of the casting, the director can weigh in on the final decisions. If time permits and there is dialog, schedule a couple table readings even if it’s a Skype session. The cast gets to know each other and can then work closely with the director far in advance.

These are just 7 simplified stages of what’s usually a multifaceted preproduction process. There’s also production design, wardrobe, tech scouting, and dealing with post-production facilities. To feel uber confident about your preproduction skills, you might find it helpful to visit our Production Services blog.