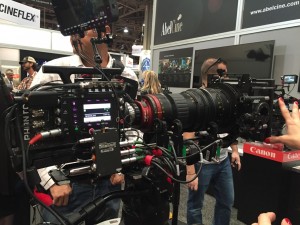 Well, the Vision Research Flex 4K isn’t exactly a new development, they announced it during NAB 2014.  Last year’s release gave us a camera system capable of up to 1000fps at 4K and 2000fps at 2k resolution which recorded to either 32GB or 64GB of internal buffer memory.  With three HD-SDI outputs, you have the ability to configure two ports as a dual link 4K output for an external recorder while retaining one port at 4:4:4 1080P for an on-board monitor or EVF.  Speaking of EVFs, an all new Phantom OLED HD Viewfinder was also introduced on this release.

The new features announced this year are certainly NAB-worthy.  Most importantly is Flex 4K now offers ProRes 422 HQ to internal recording media.  This is a great alternative to the post-intensive Phantom RAW workflow. The Flex 4K has had a memory upgrade as well.  You can now get up to 128GB on buffer RAM which will give you 10 seconds of 1000fps 4K high-speed video.  Doubling the input recording buffer definitely opens up some possibilities for recording some high-speed magic.  Finally, sync-sound audio support has been added to the camera.  While not a huge deal that this style of camera had poor or no audio support, it does make the Flex 4K a more capable general purpose camera. 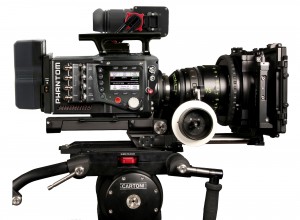