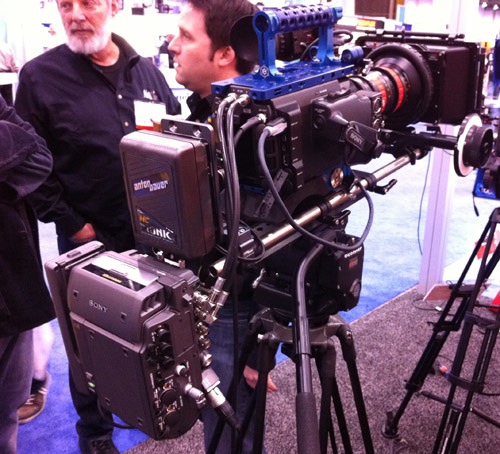 The new Sony PMW-F3 is truly a revolutionary camera. Some jobs just don’t need a RED or an Alexa that can complicate a production and drive up costs in one fell swoop. Some RED and Alexa proponents would say that they’re best for all shooting scenarios, but that’s just not the case when it comes to budget! As an industry insider said, “It’s like hitting a fly with a sledgehammer most of the time. Whereas the F3 is the rolled up newspaper, and the DSLR is your hand.”

With the F3’s ability to be accessorized like a RED or Alexa cine package and with its PL mount that accepts Master Primes and Optimos alike, it’s definitely going to be a popular camera for some time. The Super 35MM F3 sensor came from the Sony F35 and has been greatly improved. The F35 has been used extensively on episodics and movies since its release in 2008, and the F3 is now poised to fill a niche within lower budget productions without sacrificing features and quality that can be seen in their F35 camera.

Coming soon from Sony is the CBK-RGB01 Firmware Update that will enable S-Log gamma mode, Dual-Link RGB 4:4:4 video output, 3G-SDI output, and four pre-loaded look up tables (LUTs). This S-Log update effectively increases the native ISO to 1600, which opens up a world of possibilities for creative shooting in low-light conditions.

Sony F3’s with this firmware update can be coupled with the Sony SRR1 Portable Recorder that can be mounted on-camera to capture the Dual-Link 4:4:4 signal from the camera. The SRR1 utilizes Sony’s high-speed SRMemory Cards that range in size from 256GB up to 1TB in size, replacing the need for SRW tape.

The Sony F3 is truly a wonder at only $13,500 for a camera body. The rental per day is under $700, which is far less than an Alexa or RED MX rental. We predict this camera will be widely used on commercials and independent feature films, and it will hopefully reduce the number of production days we have to endure with the Canon 5D and 7D! 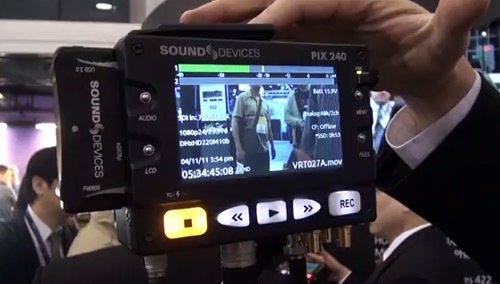 The new Sound Devices PIX 240, competitively priced at $2,600, was an old school NAB surprise. This Wisconsin based company, founded in 1998, has already made quite a name for themselves with their rock solid 744T and 788T field audio recorders. Now with the PIX series, Sound Devices hopes to set a new standard for versatility and compatibility in the video recorder market.

The PIX recorders come in two flavors. The 220 model priced around $1600, which is HMDI only, and the 240 model, which sports both HDMI and HD-SDI inputs and outputs. Impressively, the PIX 240 has the ability to cross-convert HD-SDI to HDMI and vice-versa, a feature that is both extremely useful and rare among video processing devices. The PIX uses a UDF file system to record video to Solid State Drives, Compact Flash cards, or to an external eSATA drive, making it compatible with both Mac and Windows systems. It is capable of saving extremely large video files unlike the other Mac and Windows enabled file system, FAT32. The Solid State Drive caddy has convenient USB 2.0/3.0 and Firewire 800 connections to simplify recorded video and audio downloads.

The PIX’s design is a testament to the experience of Sound Devices Corporation – it incorporates the audio input and recording circuitry of the 744T, meaning there really isn’t a need for a separate audio recorder on set. It will record two channels of audio over HDMI and up to eight channels over HD-SDI, plus two additional mic or line level XLR inputs. The timecode circuitry is also the same Ambient Technologies system found on the 744T and 788T recorders with an internal battery to hold timecode during battery swaps.

The PIX recorder comes with an integrated 5″ HD monitor, and an easy to use on-screen menu system to setup the device to suit your needs. The unit can be powered by either 12volt DC via a 4-pin Hirose connection, or with Sony L-Series batteries. This means the PIX can be on-camera mounted and even used for pulling focus if needed. It records video in either Apple ProRes 422 or Avid DNxHD formats making it natively compatible with Final Cut, Media Composer, and Premiere editing systems. So, transcoding is not required to work with your videos at the end of the day.

I suspect Sound Devices will sell a lot of these compact units, as it appears they have done their homework in determining what production houses need from a portable video recorder.

Cartoni Maxima Head, Next Generation Replacement for the O’Conner 2575

This fluid head is a game changer — beautifully crafted, a “Ferrari” that is practical and elegant! Italian based Cartoni aims to take on the iconic O’Conner 2575 and establish their new Maxima Tripod Head as the “Ultimate Industry Standard”. This revolutionary design touts ergonomics, ease of use, and ruggedness as its cornerstones.

The payload capacity ranges from 0lbs to 88lbs with guaranteed perfect balance throughout it’s entire 180° tilt range. And if utilized by a camera with a lower center of gravity, like a digital camera without a film mag, the Maxima can handle up to a 115lb load. This means that anything from a DSLR to a full cine-style film or digital camera system can be utilized. All controls, knobs, and levers are designed to ensure camera operators’ complete ease of use in any situation. However, what really separates this head from the competition is the rear digital display of the Pan, Tilt, and Counterbalance settings. These settings can be recorded by camera assistants and then changed quickly and accurately for different camera operators. Additionally, the Maxima provides a convenient “master lock-off” pin that will freeze the pan and tilt in its present state, which is great for swapping lenses or filters without altering shot framing.

This system was also designed for maximum compatibility with both the American and European camera support systems in use today. The Maxima will mount to either a Flat Mitchell mount or 150mm ball mount tripod. The head also supports multiple styles of baseplates, from euro-style quick-release plate or popular O’Conner style plates, and even the new ARRI Digi-Cine and Sony plates.

New and Innovative Lighting Solutions from Kino Flo and ARRI

Kino Flo and ARRI showcased some new lighting products this year at NAB, notably the new Tegra 4ft four-bank system from Kino Flo, and the versatile L- Series of LED lighting from ARRI. 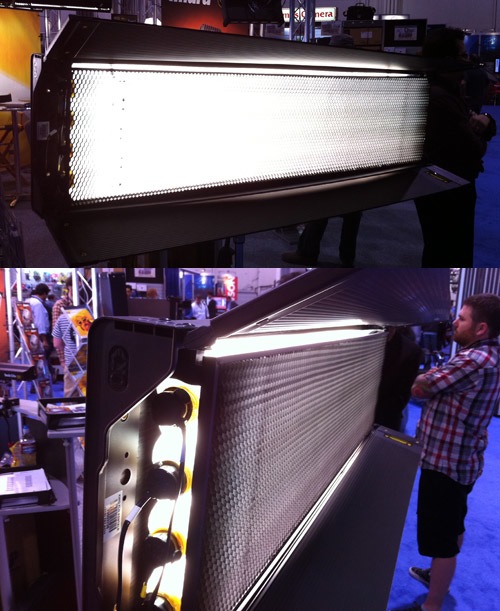 While not particularly revolutionary the Tegra is noteworthy because Kino Flo’s implementation of the most useful features from its existing lighting products and adds a couple of new features to create a stellar package. This unit has an integrated dimmable ballast on the light’s back panel, similar to the Kino Flo Diva line of lights. At the same time, it sports the individual bulb on/off switches that are available on their remote ballast 4ft four-bank model. Additionally, Kino Flo provides a remote dimmer with a 15ft extension cable to adjust lighting levels without needing to lower the light stands. Other improvements new to the Tegra line are reinforced side pieces with barn door hinges, as opposed to the “stiff wire” feel of the old style Kino Flo doors. All of this is included in a package that is 22lbs — 4lbs lighter than a comparable standard 4ft four-bank light and remote ballast package. 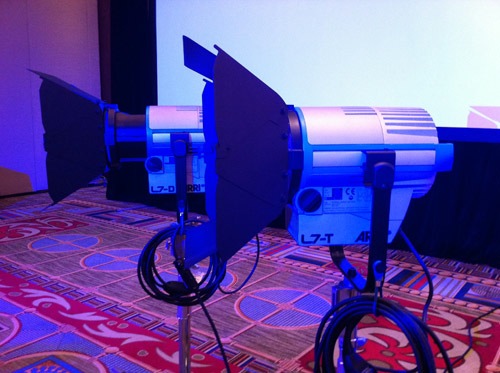 ARRI breaks the mold with their impressive new L-Series of LED Fresnel lights. Typical LED lights, while efficient, aren’t very user friendly — they have problems with multiple shadows, you can’t cut the light field effectively, and you can’t focus them. What ARRI has done is combine the versatility of a tried and true Fresnel light with the efficiency of an LED light source. Using a modified Fresnel lens, the light can be focused in exactly the same manner as their HMI Fresnel line. This gives you the same smooth and even light fall-off that you expect from a traditional Fresnel product. The focus ranges from a 50 degree flood to a 15 degree spot. The equivalent light output of the L7 Series is approximately 1000watts in spot mode, and slightly less in flood mode, while only drawing 220watts of power!

The light comes in three flavors, the L7-T (tungsten), the L7-D (daylight), and the real gem of the group, the L7-C (color). While the tungsten and daylight models are self-explanatory, the L7-C has a set of features available that you’d be hard pressed to find in any other single production lighting product. The beam is dimmable and maintains its color temperature throughout the entire range of intensity. The color temperature is infinitely adjustable between tungsten (3200K) and daylight (5600K) ranges. The system also has a +/- minus green adjustment to assist with white balancing in unique environments such as florescent lights in a grocery store. If that wasn’t enough, you can change the light to “color” mode, which allows you to dial in custom hue and saturation and save those values in two quickly accessible memory buttons to recall for later use. It’s an entire gel kit in a single light fixture! The final icing on the cake, the L7-C supports RDM with a DMX512 stage lighting control board. ARRI put together quite a package with the L7-C and we look forward to using it in the future! The bad news is that they cost over $3,000.00 per unit. You better have either one of two conditions in place to justify the cost of this unit. You either need a light that consumes less power or you require a light that generates less heat than a normal fixture.