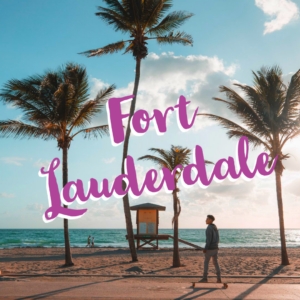 For decades, Ft. Lauderdale, its city and its beaches, has proven to be an excellent shooting location for film, television, commercials, and music video productions. While you might know about its tropical climate, miles of beaches and picturesque scenery, here are some facts that may surprise you:

When the city served as the backdrop for the hit 1960 film Where the Boys Are, Ft. Lauderdale became a hot spot for American college students on Spring Break.

Boasting more than 300 miles of easy-to-navigate inland canals known as the Intracoastal Waterway, Ft. Lauderdale is affectionately known as the Venice of America. Several productions were shot on and around them, including Burn Notice, Baywatch, Miami Vice, Bloodline, and The Glades.

Ft. Lauderdale has a lot more locations to offer incoming productions than just beaches and waterways. The city’s architecture is as diverse as its population and is considered to be amongst the most unique in the state.  It is showcased in productions such as Cape Fear, Marley & Me, Moonlight, and True Lies.

There are over 100 public and private golf courses in and around Ft. Lauderdale, and their greens and clubhouses have been featured in films like Caddyshack and Any Given Sunday.

During the height of winter, the average low temperature is 58 degrees. And 3,000 hours of sunshine a year enable Fort Lauderdale to double for almost any location in Southern California.

If you’re from out of town, the city has over 34,000 lodging accommodations to suit all kinds of production budgets.

7) Save on production-related taxes

Due to Florida’s sales tax exemption program, you can instantly save 6% on production-related expenditures, which will give you that much more to spend on your film equipment rental.

Beyond the state tax incentive, Broward County offers a cash rebate for qualified production costs of up to $500,000 for film, TV, commercials, and music videos.

Ft. Lauderdale has some of the best studio and sound stages in the state of Florida. Therefore it is an ideal place to shoot both interiors and exteriors regardless of the content or genre.

Production and film equipment rental costs in the city are incredibly competitive, which makes it an excellent location for low budget productions.

Many regional colleges and universities have nationally renowned drama and theater programs that regularly produce award-winning talent. And there are dozens of popular theatre companies.  Plus, Ft. Lauderdale is a popular retirement destination for countless acting professionals. So you can cast some or all of your projects with local talent of all ages, as did previous films like Wrestling Ernest Hemingway and There’s Something About Mary.

With countless productions filming year-round, Ft. Lauderdale is home to a skilled workforce of industry professionals with demonstrated expertise in operating every piece of gear in your film equipment rental package.

The Greater Ft. Lauderdale Convention & Visitors Bureau is as film-friendly as it gets and can help facilitate every aspect of production, from obtaining permits to contacting local, state, and federal agencies. And they recently instituted the Production Preferred Pass that allows incoming productions to take advantage of unique values and offers from more than 50 vendors.

14) Dozens of projects currently in production

At present, there are dozens of projects in various stages of production that speak to the city’s versatility as a location. Amongst them are the films Colt 45 and Drag Hell-Zombies, TV commercials for Toyota and Party City, the telenovelas Cosita Linda and En Otra Piel, and the TV shows Gator Boys and Million Dollar Listing.

15) Get gear delivered to straight to set

No matter where you plan to film in the city, from a crowded downtown street to an uninhabited beach, Moving Picture Rental will deliver your film equipment rental right to your set. With one of its four branches located in Ft. Lauderdale and more than three decades of experience in production rentals and services, our team can help bring your vision to life.