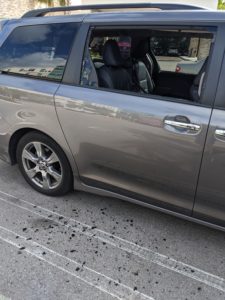 Just like competent assistants know what their bosses need before they need it, good producers know how to solve problems with their film equipment rental before they arise. And when it comes to film production, issues always occur no matter the size of the budget nor the proficiency of the crew. And while there’s nothing you can do to prevent them from happening, there are things you can do to prepare for the eventuality. Insuring your film equipment rental is chief amongst them.

Every production starts out with the best of intentions. But that fact is, producers are more likely to stumble upon a herd of unicorns than they are a production that goes precisely according to plan. Accidents are, by their very definition, unpredictable. Some are minor, like a PA grabbing the wrong filter from a kit. Some are major, like that same PA knocking over a $15,000 camera and cracking it in half. That un-insured camera could shut down your production on the first day. That possibility takes on a whole new reality in the right to work states like Florida.

Florida is a right to work state

There are certain guarantees when working with union crews, the very least of them being that everyone on set knows how to handle the specific film equipment they use. Florida is a right to work state. Simply put, crew members are not required to be part of any union. That doesn’t mean the crews in such states are not as talented, but it does present the possibility that they’re not as experienced. Not to mention, union crews only do the job that befits their title.

For instance, you’d never ask a union gaffer to operate the boom. But non-union crews often help out wherever they’re needed. However, they’re needed. You may have the best sound technician in South Florida, yet that doesn’t mean they know how to secure a pelican case full of delicate lenses. And should those lenses shatter across the floor, it’s the production and not the sound technician, that’ll foot the bill.

Rarely does a rental house allow a single piece of equipment to leave their facility without proof of insurance. It would be like giving a stranger the keys to your brand new car and trusting them to take good care of it. Were something to happen to your film equipment rental, the waiver you signed isn’t worth the paper it’s written on if you can’t afford to replace what’s been damaged or destroyed. This is how one mishap with uninsured film equipment rental could result in shutting down production and bankrupting a business. Why take the risk, particularly when insurance can easily be obtained immaterial of your financial qualifications.

Peer-to-peer insurance or an individual plan

Whether you decide on peer-to-peer insurance or an individual plan, the benefits far outweigh the costs. Peer-to-peer plans enable a network of friends or co-workers to share the risk by pooling premiums, thereby reducing overhead. It’s a popular choice amongst low-budget and amateur productions, as it makes filing claims easier. Whereas the pool covers individuals with different risk factors, premiums for individual plans are based solely on the risk factors associated with one individual. Underwriters deem insuring film productions to be high-risk endeavors in and of themselves regardless of other considerations. Therefore, individual plans may prove too expensive for aspiring producers to personally take on. There are a million and one things that producers will have to worry about on-set. Shooting without insurance should never be one of them.

The staff at Moving Picture Rental knows that getting insurance your film equipment rental can be a daunting task even for producers with several credits under their belts. You wouldn’t rely on WebMD to diagnose your ailment, so don’t rely on some impersonal website to guide you through the process. With more than three decades of experience in production rentals and services, their experts can answer your questions and allay your concerns so you can focus on bringing your vision to life.