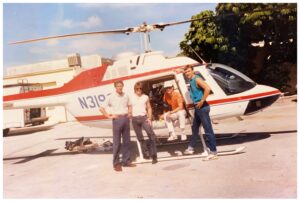 Going through my files recently I found this photo from the late ’80s with some of my fellow crewmates during the filming of a high-speed offshore powerboat race in Miami. Boy, we had a great time!  It reminds me of another story I recently heard about another crew person in the 80’s who once tried to get a helicopter shot flying under San Francisco’s Golden Gate Bridge. Remember, in the ’80s there were no such things as drones. The director asked this guy to get the shot because he was the only one on the crew who also had a helicopter pilot’s license.

He rented a small, two-man Engstrom helicopter. The idea was to mount the camera under the aircraft on the struts so that the shot had no obstructions. All he had to do was fly the copter under the bridge, and he’d pocket an easy $5,000. The one problem was it was illegal without a special permit. But, he was young and dumb, so this sounded like fun.

Full of confidence, he flew the helicopter to the nearest landing site near the bridge. The director mounted the camera on the struts. He loaded the camera with film, turned it on, and our friend flew in a beeline to the bridge. It was just after sunrise, and the traffic on the bridge was light. Nobody seemed to pay much attention to him as he flew down low over the water. He flew under the bridge and did it! He got the shot!

All is Well Until it Isn’t

After flying under the bridge, he pulled back up. At that moment, the camera broke off the mount and fell. Crashing headlong into the water. That camera was worth $25,000 and, no, they were not able to recover it. There went our friend’s $5,000, too! No “money shot.”  No money.

The good news was that nobody caught him, but the “prank” was all over the news. Since the second unit team had filmed this stunt. But they made sure not to show any of the helicopter’s identification numbers in the footage when they called it in. And, at least, they got paid $500 for the news footage.

There was no way they’d try that again. They’d gotten away with it once, but surely police would be waiting for them the second time. The director paid the $25,000 to replace the camera because he didn’t have insurance coverage. Moral of this story: Rule number one of film equipment rental is to insure your gear.  But that’s the subject of another blog article.

Now that we have your attention, here are more dos and don’ts for renting film equipment that we’ve learned over the past decades.

Here are some essential things to do with your film equipment rental:

Here are some important things not to do when renting film equipment: