The Film and TV Gear Convention

Had the great fortune to travel to Canada for the annual Sim Digital’s Annual Technology Showcase.  I quickly learned that Toronto is a production epicenter for film and TV gear. Toronto is an international city with many different integrated cultures that lends itself to studio and on-location production for dozens of feature films, commercials, and TV series.

Sim Digital pulled out all the stops for this event with the latest in film and TV gear.  Walking through the door I was warmly greeted by the SIM team. They handed me a drink and sent me on to experience the gear! 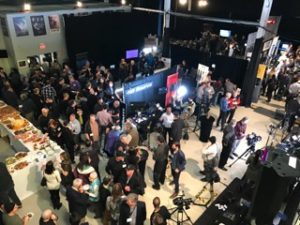 As many of you know, I’m a food and wine guy.  The food was absolutely amazing with multiple bars — equaling no waiting for a drink all afternoon and evening!  That was a bonus/departure from most events I attend.  As they say, the devil’s in the details!  The event was so large — over 650 attended — that heated tents were built to accommodate.

On the Convention Floor

Going through the first tent there was a plethora of the latest film and TV gear from PS, Arri Sky Panels, the new Kinflo Celeb 401Q, Arri L10-C, L6-C and plenty of LED technology.   As always, a pretty woman was “sitting on set” so we could see the lighting at work. 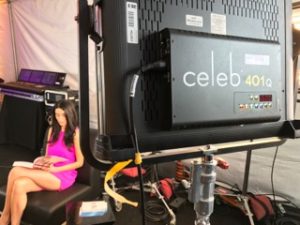 Moving further into the tent, I found cranes, electric camera cars and a bunch of other specialized grip gear from a blend of Procam and Production services “PS” a Sim Group company.  In the main building, film and TV gear displays with experts on hand from Arri, Fujinon, Zeiss, Panasonic, Sennheiser captured my interest. Chain Saw Post and Bling were on hand with an amazing HDR presentation in a proper color grading suite.  Comparing HDR displayed on 300 and 1000 NIT displays.  This demonstration was super relevant as 2017 will be the year of HDR capture.  Everyone who experienced this demo now has a technical and aesthetic understanding of what we have to look forward to with HDR becoming the “new normal”.

The new macro Raptor family of lenses by IBE Optics were set up to shoot a mini still-life suburban neighborhood.  All that was missing was a moving train.  These lenses are nothing short of amazing in 100MM, 150MM, 180MM.  They feature full frame coverage at 24×36, 1:1 magnification and a consistent T-stop of T 2.9. 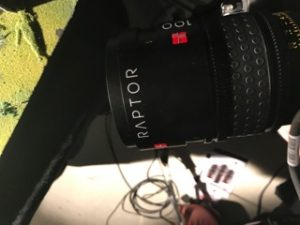 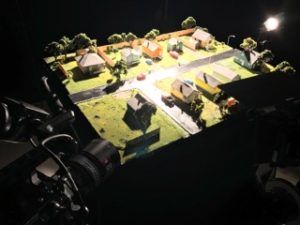 As you turn your head with VR goggles the sound “moves’’ giving you the effect and illusion that sounds are in front, to the side and behind you.  Creating audioscapes for the VR experience is creatively and technically different than those for conventional film or television productions.  I watched the 2-minute action scene demo with a sword fight in play and it was truly impressive.  They are taking Virtual Reality to the next level for sure.

CEO, James Haggerty of SIM Group gave a heartfelt thanks to all for attending and made everyone feel at home.   Directly after they treated us to the SIM Group’s show 2016 reel.  The reel was FAT with a wide variety of film and TV projects that they’d contributed to.  I had a great time hanging out with Tom Fletcher who is now Director of Sales with Fujinon.  Congrats Tom Fletcher on the new post, you’re going to bring a lot of wisdom and energy to Fujinon!
It was great to have some face time with Craig Milne general manager, John DeBoer, President camera division of SIM,  rental agents, Melanie Watier, Colin Maitland, and camera department manager Leslie Mercado, as well as Max Torroba Director of Playback Operations from the Vancouver office.  What a great team of people pulling rabbits out of hats every day!  We discussed gear and more gear.  All of us peering into the mythical crystal ball of what will be the next 10 hot pieces of camera gear that Director’s of Photography will want.  As always, the SIM team has a great sense of what’s to come!  The trip up to Toronto was certainly worth it as my time with the SIM team is always fun and full of insight into the world of film and TV gear.
Big thanks for the invite!!  See you at NAB.
Tweet Pin It