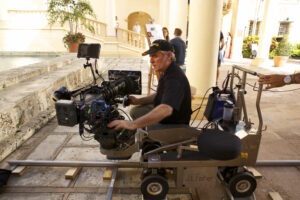 Your camera will be the star of your production equipment rental package. Whichever one you choose to use, it will set the tone for nearly everything and anything else on your list. The lenses. The lights. The stands. The dollies. The filters. It’s likely to even impact your choice of sound equipment. So, needless to say, we advise you carefully consider all your options before deciding which one is best for your shoot.

Of the various makes, Canon is a popular choice for filmmakers across a broad spectrum of genres and experience. And the Canon C500 Mark II is the latest addition to their already considerable inventory.

Similar to its C300 Mark II predecessor, Canon’s C500 Mark II is incredibly lightweight (just under four pounds), allowing for optimal maneuverability. Both models come with built-in timecode and LCD screens, and although the C500’s actual size is only slightly larger, its screen’s resolution is far superior. To shoot in slow motion on the C300, you’ll need to engage the LCD screen and either increase or decrease the FPS manually. But in the C500, Canon added an S/F button that allows you to switch to slow or fast motion with the simple push of a button.

Unlike the C300, the C500’s EVF (Electronic View Finder) is user-removable and one of the many features that make this latest model even more modular. Both feature two XLRs that allow for full manual control, but the C500’s are built into the camera body, whereas the C300’s are found on the hand unit. While not an improvement on the C300’s performance, it makes for more convenient operation.

The C500 offers two optional extension units. The smaller one enables you to add such features as an Ethernet and remote connection while the larger one provides for the ability to use V-mount batteries. However, the use of either extension prevents the possibility of using the Electronic View Finder.

Canon pioneered autofocus in their cinema cameras, which covers 80% of the image area. Upon its release in 2015, the C300’s were considered to have the best continuous autofocus and made for much easier solo operator shooting. The C500 has further fine-tuned the dual pixel autofocus feature by changing the tracking and ramping speed of the focus between two objects, influencing how fast the focus shifts.

Both models include CMOS sensors with up to 15 stops of dynamic range (which is greater than the human eye). However, the C300’s image sensor size is equivalent to shooting in Super35 and can only output at 4k. The C500’s are full-frame with a17x9 aspect ratio and an effective18.69 MP resolution, as well as being capable of 5.9k output in cinema RAW light as a result of its new Digic DV 7 image processor. Furthermore, the C500 offers a full-frame in 5.9k using spherical lenses as opposed to anamorphic ones. While the camera does include the option of shooting in anamorphic, doing so will result in losing resolution on the side of the sensor.

Finally, the C500 includes a built-in mono microphone that the C300 does not. As for recording media, the C300 includes two CFast card slots and two fixed ND-filters with two, four, and six stops built-in. The C500 improved on that with two CFexpress card slots. Its two fixed ND filters with two, four, and six stops are also built-in but can be combined to achieve eight or ten stops of ND and automatic exposure adjustment.

If you need more advice on which camera to choose on your production equipment rental package, call, text, or email our experienced shooters/rental agents at Moving Picture Rental.