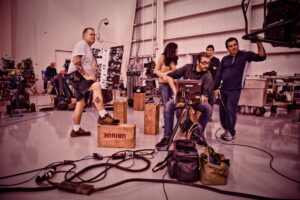 In our experience, productions are often the living embodiment of Murphy’s Law.  Anything that can go wrong will go wrong. Budgets fall short. Schedules go awry, and creative differences abound. And with more than enough to worry about during any kind of shoot, we’ve found that the best producers find ways to minimalize risks. Especially on the ones with budgetary constraints. One of them is to ensure their film gear rentals are as reliable as their crew. So if you’re planning to shoot a commercial in South Florida and are on a tight budget, Moving Picture Rental can help you with both.

Brands produce commercials for one reason: to market a product or a service. We’ve worked on both kinds: from small regional spots produced for a few thousand dollars to national campaigns that cost millions to shoot. And whether it was selling athletic wear, electronics equipment, or investment opportunities, lighting was essential. When advertising a product, the lighting has to make it look good. When advertising services, the people who are using the services also have to shine. HMI lights were created for just such a purpose.

Lighting. Your brand can shine with HMI lights.

Most traditional lights use incandescent bulbs that offer half the color temperature of sunlight and are comparably inefficient in comparison to HMI lights. These lights are four times more powerful and provide a color temperature equivalent to daylight, give or take a few hundred Kelvin.  ARRI manufacturers amongst the most exceptional HMI lights made today that are regularly used throughout the entertainment industry. And the M18 1800w is a prime example of a film light that will make your commercial’s product or service literally shine.

The ARRI M18 is lens-less. They engineered its focusable lamp heads with a rippled texture to produce plenty of light while using the spreader lenses. Plus, the tilt lock will hold even the heaviest light banks, and cross cooling guarantees it’s safe to operate at any angle. Best of all, it’s quality on a budget. Rent from Moving Picture Rental (MPR) as an affordable part of several film gear rental lighting kits.

Grip Trucks. Getting your gear from location to location.

No matter how much equipment you’ll be renting, you won’t want to transport it during company moves without a grip truck. As a result, MPR offers three and five and ten-ton Sprinter grip truck rental packages. Designed by grip and lighting veterans with 30 years of experience on sets and in rental houses, it’s one of the few smaller grip trucks available in South Florida that simultaneously features a full-sized 7’x8’ 3300-pound liftgate. Simply put, when coupled with a hard-working crew, such dimensions have the potential to cut your load-in/load-out time in half.

Or, rent the truck without a driver and fill it with the film gear rentals you need without a crew. But if you need both, Moving Picture Rental’s database of expert grips, gaffers and electricians is super experienced.

Crew. Help is on the way!

As one of the premier equipment rental houses in South Florida, MPR works closely with crews from New York to Miami. Many of the names in that database are now longtime friends and neighbors. Others are second-generation professionals who learned the specialized tricks of the trade from their parents. All are at the top of their game and will help streamline your commercial shoot. And trusting them to hire your crew for a two-day shoot will prove more cost-efficient than giving that job to a production coordinator.

As a commercial producer, you’ll have to deal with the agency and brand representatives, securing locations and putting out a thousand other fires. Let Moving Picture Rental take some of the weight off your shoulders by putting together a film gear rental package to meet your budget and staffing your shoot with a first-class crew to operate it. To find out how they can help, give us a call today.