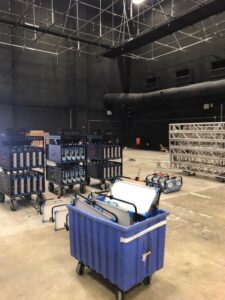 This shoot was completed many months before the Coronavirus stopped film production in its tracks in March 2020 throughout Florida, leaving the state’s film industry reeling and film industry experts wondering when and if production work would ever return.

As industry professionals, we are hopeful that with continued guidance from health and public policy officials in the state, Florida will soon re-open safely to film production, albeit location, stage, and crew size modifications.

Why film in Florida?

There are still so many good reasons to film here, beyond the incredible locations, talent, and experienced production teams. Let’s highlight some of the financial incentives for filming in Florida.

Getting back to The Right Stuff example: for the two-day shoot in Tampa, the production company spent just over $500,000. It will get back 10% of the amount paid from the film incentive program offered by Hillsborough County. For film equipment rentals, this can add up to a 16% savings if you add in the savings from the Florida sales tax exemption.

No Sales Tax on Film Equipment Rentals or Purchases

Think of this as a kind of reverse sales tax. It pays to spend money in Hillsborough County. Currently, the Hillsborough County film incentive program has an annual rebate limit of $500,000. This may increase. Right now, producers have to spend over $100,000 in Hillsborough County to qualify for the rebate program. The expenses can be for almost anything needed by a film production company, including crew, extras, hotels, support services, and film equipment rentals.

DiCaprio’s company was not the only one to grab these incentives. Dan Myrick’s film studio was going to shoot in Tampa. Myrick is best known for making independent film history by directing The Blair Witch Project. He planned to spend about $1 million in Tampa shooting Erwin and would have gotten about $100,000 back. When asked by the Tampa Bay Times about his post-COVID19 plans, he recently said, “I will return”.

This past January 2020, Lady of the Manor, starring Justin Long, filmed in Tampa. Justin Long said that this film is a female buddy movie. The production was in Tampa for about two weeks and shot for five days in St. Petersburg. The production spent about $1 million on film equipment rental, local crew, extras, hotels, craft services, and logistics. This made it eligible for around a $100,000 refund.

The state of Florida used to have film tax breaks; however, the state program ran out of money a few years ago. The Florida counties took up the challenge to offer incentive programs. Hillsborough is not the only county to provide incentives that make filming less expensive in Florida.

Pinellas County also has $500,000 allocated for its film incentive program. It gives producers a 10% rebate for everything spent in that county on film rental equipment and other production expenses. Miami/Dade County has a 10% incentive if a production company spends at least $100,000 and films at least 70% of the production in that county.

Florida is not going anywhere and will again be a great place to shoot.    The state offers so many things that make filming in Florida exciting, including up to a 10% rebate for renting film equipment and other production expenses. These incentives are encouraging producers to bring TV and film productions to Florida. As with all tax breaks, there is a limited amount of money allocated. If you are shooting in Florida, be sure to check with the Florida Office of Film and Entertainment for COVID19 updates and to find out what incentives are currently available.

Call us to discuss any of your future production and equipment rental plans. We can help you get the best film gear and production incentives for your budget.